I regularly  make my version of the classic middle-eastern salad tabouleh.  I say "my version" because I make it with quinoa instead of bulgar wheat and I add more ingredients than tradition dictates.  This isn't only because my partner has a gluten allergy but because I recently learned that quinoa [pronouned keen-wah] is considered a super-food.

In recent times not a week goes by when some fruit or grain isn't declared to possess super powers.    However, this little grain was declared as valuable as gold by the Incas.  Some provenance huh?

Wikipedia says the following about it's nutritional value:

"Quinoa was of great nutritional importance to pre-Colombian Andean civilizations. In contemporary times, this crop has become highly appreciated for it's nutritional value, as it's protein content is very high (12-18%), making it a healthy choice for vegetarians, vegans and athletes.  Unlike wheat or rice (which are low in lysine), quinoa contains a balanced set of essential amino acids for humans, making it an unusually complete protein source.  It is a good source of dietary fiber and phosphorous and is high in magnesium and iron.  Quinoa is gluten-free and considered easy to digest".

For more info and pictures of the plant click here


True tabouleh doesn't include vegetables like celery, carrots, courgette etc.  However, I try and eat as much raw vege as possible, so I add whatever I have to hand.  I guess my nod towards the pukka salad is my use of copious amounts of parsley and mint.   If you're thinking you don't really like the idea of so much mint and parsley, think again.  There is a lot of it but it simply MAKES the salad.  The combination of parsley, mint, lemon juice and olive oil create magic when blended together.  A taste explosion that leaves you feeling instantly refreshed and sanctimoniously healthy.

Tabouleh keeps for at least four days in an airtight container in the fridge.  I love nothing more than having this ready to dish up into my lunchbox - add some tuna, hard boiled eggs or cubed chicken breast - and wallah - a colourful, light and super-healthy meal. 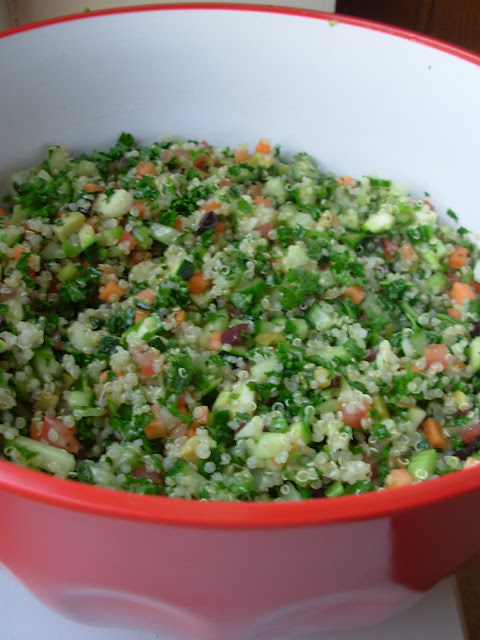 All the vege should be diced into very small pieces.  I use my trusty Nicer Dicer which ensures small, uniform pieces and saves loads of time.

2 large carrots - peel and dice
1 large courgette diced [skin on - spongy middle with seeds removed]
1-2 bunches of spring onions [to taste]
3 medium size tomatoes [deseeded]
1 large bunch of flat leaf parsley finely diced [curly will also do]
1 large bunch of mint finely diced [leaves taken off stalks]
1-2 cloves of crushed garlic [to taste] - I cut mine in half and leave them to infuse the salad, as I can't digest raw garlic
100g quinoa or bulgar wheat
125ml of freshly squeezed lemon juice
125ml olive oil - I don't use extra virgin as the taste is too overpowering, I tend to use light olive oil
1 tsp of salt

Pretty as a picture! 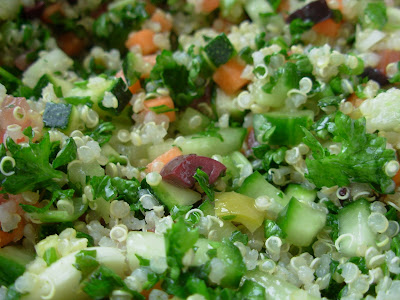 I added some diced green and black olives to last weeks salad and it worked very well.

And on a totally unrelated note - I spotted this lovely bloom in my garden this morning: 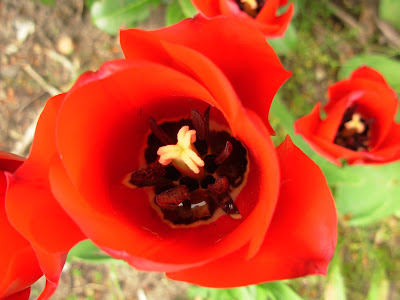 My name is Sarka and I write the food blog http://cookingyourdream.com. I stumbled across your blog via UKFBA and it's really nice! I'm a big fab of quinoa and I'm constantly seeking new quinoa recipes! This one looks wonderful!

I don't know if you've heard yet, but there is a Food Blogger Conference being held in London on June 4th, 5th & 6th 2010. We would love for you to join if at all feasible. It's open to UK and non UK food bloggers as well. It will be the perfect opportunity to network, learn and expand on relevant topics, eat delicious food and have a good laugh. We have some award-winning guest speakers and some lovely goodies.

I really hope you can make it and look forward to meeting you.

Thanks Sarka. The conference sounds great - I'll definitely check out the link. Thanks for the kind words and the info.

This is definitely one of my all time favorite salads, it looks amazing.
*kisses* HH

Quick note to let you know that I have nominated your blog for an award :-}}

Thanks! You're too kind x

I have not tried this. It looks healthy and delicious. I would love to try. Thanks for sharing the health info.