Return of the prodigal baker 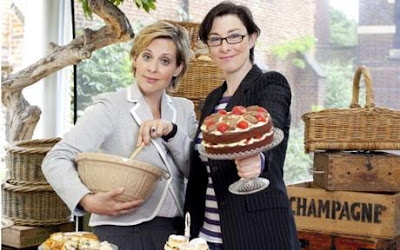 Wow, I'm back after many months in the wilderness.

Here are my excuses - first of all I got a more demanding temp job, then my Mum arrived from South Africa for three months, then I  moved to an open plan office, which meant no more sneaky posting at work.

I'm happy to say I've still been baking and have tried quite a few new goodies such as:

Basically they're just normal recipes which I've made using gluten-free flour.  They all turned our really well.  I promise to write posts about all of the above very soon.

I've been loving The Great British Bake off - which has inspired me to seek out recipes and make all of the above.  I found myself shouting at the telly going "you don't do that silly!!!!"   I found David particularly frustrating, as he'd always try and do things differently, it would come out a mess and yet somehow he got through.  At one point I was shouting at the telly that Paul Hollywood must have a crush on him.  Anyway...... at least he got his just desserts last week.

I do wonder about the need for having Mel AND Sue - surely just the one would be enough.  Has anyone else noticed how Mel scrunches up her face, like she's staring into glare every time she talks to the camera?  A double act it doesn't need to be!

Well I look forward to seeing those recipes posted, thanks.

Welcome back after the long break. Would love to see more food :) Happy Holidays!

Welcome back after the long break. Would love to see more food :) Happy Holidays!