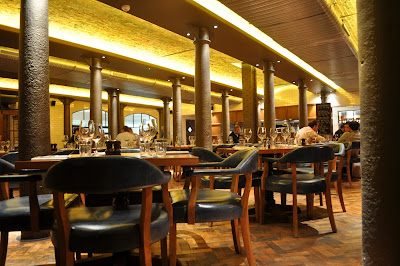 Some of my earliest and fondest memories of eating out as a child is a steakhouse in Durban, South Africa called Steve and Janets.  I used to order a prawn cocktail, followed by a surf and turf steak, or sometimes a rump with garlic sauce.  Dessert was either soft serve ice-cream, topped with chocolate sauce, or later on a Tartufo which was an Italian dessert shaped like a breast.  [This was the 70's].  I remember the anticipation of my sizzling steak arriving on a black caste-iron plate on top of a wooden board.  Me and steak......... have a very long love affair.

Upon moving to London seventeen years ago I was puzzled by the fact that there was nary a steakhouse to be found.  I dined in a Tibetan Restaurant, no problem, but a cut of steak accompanied by chips and a sauce was inconcievable?

According to my calculations steakhouses have only sprung up in the last 10 years.  Starting off with the Gaucho Grill and then Black and Blue chains.  I only went to Gaucho Grill in Canary Wharf once and they disappointingly got our steak order wrong.  I went to Black and Blue in  Borough Market once and it was good, went to the one in Wimpole Street and it was OK and then went to the one in Waterloo and it was terrible.  This was over a 12 month period.  I think the brand have seriously taken their eye off the ball, or possibly sold off their franchise to unscrupulous food haters.  All I can say is, when in London avoid Black and Blue nearWaterloo Station at all costs.  The steak arrived cold, it was overcooked and the limp salad looked a week old.  We refused to pay.  They obviously bank on only catering to tourists who won't ever return anyway.

What sweet relief when I happened upon Hawskmoor!

The restaurant is tucked away behind non-descript black doors and could be easily missed.  I discovered it's in the same street as Pineapple Dance Studios and was fully expecting to see Louise Spence flouncing down the street but there wasn't a TV camera in sight.  Although I did notice a clutch of people outside, possibly waiting for a glimpse of the stubbled one with the spectacular calves.  I digress..................

We were greeted by no less than three cheerful receptionists and led downstairs, through the bar, to the restaurant.  The decor manages to pull off historical modern very well - it used to be the Watney-Combe brewery in the 1800's.   Our waiter was a charming young Brazilian, who was very knowledgeable and attentive.  I decided to go for the Express Menu, which features a summer salad to start and then a 200g rib-eye steak with a choice of one side dish and a sundae for dessert.  2 courses £20, 2 courses £22.50. 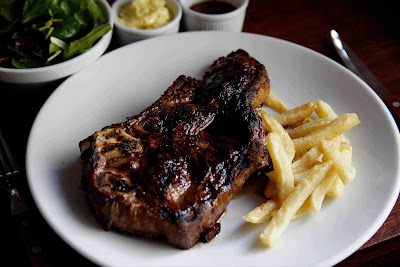 The summer salad consisted of an artfully presented conical stack of julienne vegetables dressed in a very simple but well seasoned and tangy vinaigrette.  Light and refreshing and got the gastric juices flowing in anticipation of beefier stuff to follow.

The 200g rib-eye was the perfect size for me.  What can I say about the meat ...... if I was Shakespeare I'd write a sonnet about it.  As soon as the plate arrived under my nose I was transported back to the steakhouse days of my youth.  It was so flavourful that I was glad I didn't order any sauce as it would have diluted the wonderful flavour of the beef.  The meat was very tender but with enough bite to still do justice to the magnificent beast it no doubt descended from.  For my side I ordered the creamed spinach, which was a tad disappointing.  I couldn't detect much creaminess and I think it could have benefitted from a little more seasoning or possibly a hint of garlic.  My friend had the grilled field mushrooms which were up to scratch and made the perfect spouse for a marriage made in heaven - steak and mushroom.  We didn't have dessert but I saw the sundaes at other tables and they looked fun.

Make no mistake Hawksmoor is a "treat" restaurant, unless you happen to be a city banker.  For instance a porterhouse [T-bone] for two sets you back £52 and that's before you have any chips or sides.  Click here for the full menu.

I've since been back to Hawksmoor and this time I really was going to the theatre afterwards.  So I had the Express Menu again, except I had triple fried chips as a side.  For me they were a bit too hard [I think triple fried should have made me realise that] but that's just a personal preference.  Next time I'm going to order chips fried in beef dripping instead.  I'm also dying to try their roasted marrow bones - another childhood favourite .......... but that's another story for another time.

Have been to Durban and I am pretty sure Hawksmoor as well and from what I remember Durban was more memorable!
Whilst I don't wish to belittle good British food, my experience of South Africa takes some beating if you are a carnivore!

I agree, South African food does take some beating and not just if you're a carnivore. Plus even now it's still cheap to eat out in S.A with pounds. On my two most recent trips back to visit family I've been very disappointed with the quality of the Steakhouse chains called RJ's and Spur. The quality and service was awful. So disappointing, as in days gone by it was almost impossible to find a bad steak but sadly not anymore. Next trip I'm going to seek out an independent place.