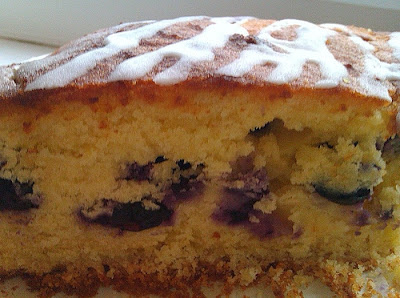 Lemon and blueberries are a match made in heaven.  I often get the craving for an intense hit of lemon, a burst of gooey blueberry and a hint of sugary sweetness.
What's great about this cake is that it contains ground almonds, so it's super-moist. Also, ground almonds have the health benefit of being lower in GI [fuller for longer theory] and as we all know nuts are healthy for you.
Recipe:

3 tablespoons of milk [I used a little extra milk as I use gluten free flour which can make cakes a little dry but it you're using normal flour you may not need it].  The idea is for the mixture to be quite stiff but certainly not like a paste

Make sure the butter is very soft. I take butter from the fridge and put it in the microwave on "warm" in 20 second spurts until I can easily stick my finger in it and leave a hole]

Sieve both the ground almonds and flour. I put them in the sieve together. The flour goes through easily but the almonds take longer. If there are some stubborn flakes at the end that won't go through I sprinkle them over the rest from a height to incorporate some air.

Cream together the butter and sugar until very pale and fluffy. For at least three minutes, five is even better, add the vanilla and lemon zest towards the end.

The mixture will be quite stiff but that's ok.

Add the two tablespoons of lemon juice.  [At this stage, if you're using gluten-free add the three tablespoons of milk and beat for a further few seconds].

Spoon half the mixture into the cake tin spreading it out evenly with the back of a spoon.

Sprinkle over the blueberries - making sure that you distribute them fairly evenly.

Spoon over the rest of the mixture and spread it evenly with the back of a spoon.

Test the cake after 40 minutes by inserting a toothpick or skewer into the middle. It should come out clean.

Once the cake has completely cooled put the icing sugar in a small bowl and one teaspoon at a time stir in the lemon juice.  You'll need to stir quite a bit between each addition as it takes a while for the icing sugar to melt.

You want the consistency to be thick.  Almost so thick that you could write with it.  [Mine in the pic below isn't a good example as the drizzle turned out too thin :-( ]

Using a small self-seal bag spoon the mixture into one of the corners and seal.  Push all the drizzle down into the corner.  Taking some scissors make a tiny incision on the corner.  The drizzle should pleasingly come out in such a way that you can make lines with it.  Without being too fussy drawn lines over the top of the cake. 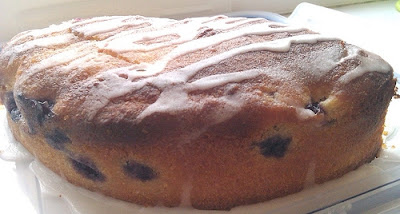