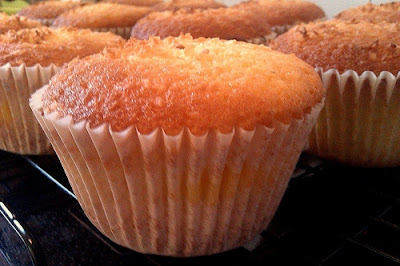 These cupcakes taste of summer and have a lovely tartness to them.  I'm not crazy about sugary icing, so these don't have any!  They do however, have a lovely dollop of mouthwatering passionfruit curd in the middle. The cakes are very moist.  I guess you could say this cupcake is not really a trendy cupcake [in the new fashion of lashings of icing and decorations] but it is a cake in a cup.

I used my basic, trusty sponge cake recipe to which I added lime zest and shredded coconut.  I made some passionfruit curd [recipe here]  last weekend, so thought I'd experiment and add a heaped teaspoon of curd into the middle of the cakes before baking.  You could happily use some quality shop bought lemon curd instead, or just omit adding any curd.

Sift the flour and baking powder into a bowl, then gently stir in the coconut and lime zest and set to one side.

A sponge is made by the creaming method; that is, the fat and sugar are creamed or beaten together until light and fluffy before other ingredients are added. It's important to beat the butter and sugar well, as this incorporates lots of air which makes the cake light. Begin with very soft butter [I soften mine in the microwave on "warm" until it's almost melting] add the sugar and beat with an electric whisk for up to 5 minutes, until fluffy and pale. This is the secret to a very light sponge.

Now add the eggs. Beat them lightly first to break them up and add the teaspoon of vanilla to the eggs.
Add a quarter of the egg, plus a spoonful of flour and beat on the lowest speed until completely incorporated. [Adding the egg gradually along with a little flour should stop the mixture curdling, or forming tiny lumps, which can make the cake heavy]. . Add the remaining egg in batches in the same way.

Add the remaining flour and fold in with a large metal spoon. The cake batter should be wet enough so that a scoop of the mixture will slowly fall off a spoon when held sideways, rather than running off easily, or sticking completely.   If this doesn't happen to your mixture, very slowly incorporate tablespoons of milk until it does so.  I've been known to add up to 6 tablespoons in mine.  This is the secret to a very moist sponge.

Using a large spoon fill the cases half way up with the cake batter. Make a small depression in the middle of each cupcake with a teaspoon and add a teaspoon of curd.  Using the large spoon again divide up the remaining batter between the cases.  They should be approx. three quarters full. Take a large pinch of shredded coconut and sprinkle over each cake.

Put in the oven and bake for 20 minutes, or until well risen and golden brown.  Remember all ovens differ and quickly opening the oven after 15 minutes to check won't ruin them. 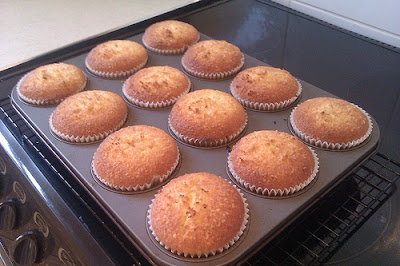 As you can see they turned out wonderfully.  A very consistent bake - they even all rose the same amount - so I was really pleased.  They are wonderfully moist and very coconutty.  The hint of curd in the middle adds a pleasing third taste dimension too.

Email ThisBlogThis!Share to TwitterShare to FacebookShare to Pinterest
Labels: cakes