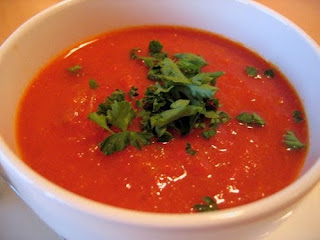 I make a really great pasta sauce with onions, orange, red and yellow peppers, tomato passata, tinned tomatoes, medium red chillies and a bit of sugar.  It's one of Anthony's favourites.  I hadn't made it in a while and he was really looking forward to it.

In Sainsbury's they had run out yellow peppers, however there were some in their "value" bags and I persuaded him to make an exception and buy something "value".  So, I made the sauce exactly the same as always and all seemed fine until it came to dishing it up.  Upon hitting the rice [we sometimes have pasta sauce with brown rice]  the sauce became very runny and strangely enough it had very little flavour.

Lesson learnt.  Even though "value" peppers look the same and feel the same, they're NOT the same.  For the life of me I don't know how they're grown to look fine and yet in ever other way be fake.  I guess it's down to lack of sunshine?

Anthony asked me how I could possibly think that the half price peppers could possibly be the same as the loose ones?  I replied, quite loudly it must be said, "BECAUSE THEY LOOKED THE SAME!".  I'm usually not such a trusting and naive soul but I thought, just this once, we might get away with paying less for a vegetable.

He ate half his dinner with very long teeth and then came up with a brainwave.  Why not liquidise the sauce and make soup?

This I did, adding some little chunks of dried chorizo sausage and a can of chickpeas.  It turned out fab and I've just eaten some left-overs for lunch.

In fact I may just buy value peppers again just to make into soup.

Are there any "value" fruit and vege which you've found have much flavour?