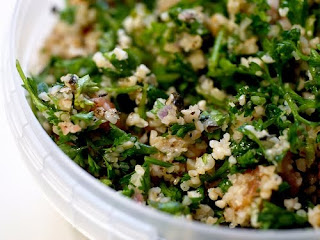 This Saturday I had a friend up from London for lunch.  In true mad-me style, I decided to serve three dishes which I've never done before.  She's a very old friend, so if everything went pear-shaped we could have popped in the car and retreated post haste to the nearest gastro-pub.

I made Moroccan Lamb Tagine from an Anthony Worrall-Thompson recipe [although being tagine free I used my trust LeCreuset casserole dish] - as usual I made some tweaks:


I'm pleased to say it turned out great!  Rich, deep flavours, with melt in the mouth lamb and as an added bonus leftovers tasted even better the next day.

On Saturday morning I decided that just having the stew and rice would be a bit too "brown" and also a bit too "soft" on the palate - so I decided at the last minute to make tabbouleh as an accompaniement.    Aaaah, but bulgar wheat is well ..... wheat, so another no, no.  So I used quinoa instead.  This "gold of the incas" worked really well.

Having recently ordered tabbouleh in my favourite Lebanese restaurant Noura, in central London, I realised that the salad is a lot better with very little bulgar wheat involved.  To the point where it makes up about 5% of the dish and the salad has white flecks and is mainly a luscious green.    So I only used half a cup of quinoa. 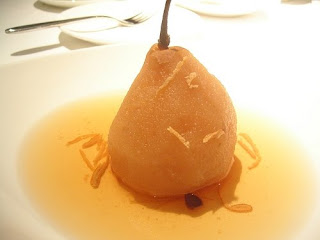 For dessert I served Cinammon and Wine Poached Pears.  I missed out the caramelisation stage, because I tried twice and the butter and sugar wouldn't caramelise, it split. [No idea why].   However, having just the pears, syrup and marscapone worked beautifully.  I couldn't find the wine they recommended on the shelf at Wiatrose, so used this one.  This dessert was light, had a wonderful depth of flavour and is going to become a favourite.

Having friends over makes me push the boat out and thank goodness I have three more "fall back" recipes for entertaining in future.