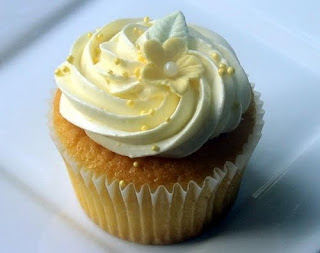 Along with the leaning tower of cheesecake [below].  I also made some itsy-bitsy, teeny weeny vanilla cupcakes.

I know cupcakes are pratically passe now, due to the over-obsession with them but I've hardly made any in the past and I wanted to give my "mother-in-law" something pretty and girly.

I used this recipe from Good To Know Recipes and they turned out to be the richest and moistest cupcakes I've ever made!

I adapted the recipe for gluten-free:

Cream the butter and the sugar in a food mixer until light and fluffy, then gradually beat in the eggs and the flour. Add the milk so the mixture easily drops off a spoon.

For the topping, beat the butter with 50g (2oz) icing sugar, then add the rest of the icing sugar and the vanilla extract (add a few drops of natural food colouring for coloured icing). Scoop the very top off each cake and cut in half to make 'wings'. Mix some lemon curd into the butter cream, then fill each cavity and place the 'wings' on top.

I didn't do the whole "wing thing" - I just made the icing and put it on top.

I don't have a terribly sweet tooth and therefore can't handle the mountains of icing some cupcakes seem to have these days. I mean some have over an inch of icing - enough to induce a diabetic coma!   I made the amount of icing suggested above but I think it was FAR too much.   I had half of it left over.

I was too exhausted too try and find my icing bag and nozzles, so I just used a knife to swirl on the icing and then topped them with either sprinkles and tiny silver balls, or just a small white or yellow sugar flower in the centre.

In retrospect I think that creamcheese frosting with lemon curd may have also worked really well.  I'll give it a try next time.