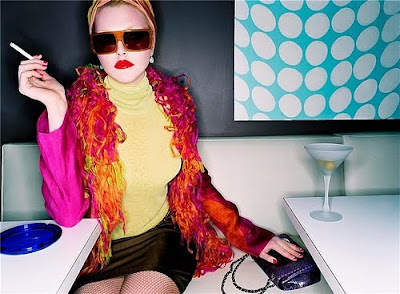 Today I'm probably feeling a bit like The Delicous Miss Dahl.  My, my but she's got some awful stick over her schtick.  I don't entirely blame her, because these people have agents and advisors and the show has a director.  Unless she's completely surrounded by sycophants, surely one of these people should have pointed out that the whole idea would be her undoing.

As people  have pointed out, she hasn't committed a heinous crime.  [The catholic church are doing too good a job of that at present].  Her only crime is having starred in a 30 minute commercial for herself, her sex-kitten routine, her books and a bit of food assembly.  I tried to like it, I wanted to like it ....... but as soon as she confided, in complete earnestness, that she fantasised about "Mozzarella di Bufala" and coquettishly gazed at the camera for the umpteenth dozen time, my itchy finger hit the remote.

The reason I believe that Soph and I may have something in common, is because for about the last two months everything I touch seems to turn to shit.

Last night I decided to make Chicken Biriyani.  Two posts down I wrote about finding a South African shop in Milton Keynes.  I bought a packet of ready mixed spices which had a biriyani recipe on the back. I mean, surely if a recipe is printed by the  manufacturer's they must have made sure it works.  Right?  Wrong!

I used to make this dish quite a bit in years gone by haven't done so since moving to the U.K.  It took a lot of work, was fiddly and time consuming and the end result looked like a mass of poop on the plate.  I certainly won't put your digestion in jeopardy by showing you a picture.  Actually, I didn't take a picture.  I was too pissed off.  So anyway.......... this blasted biriyani............. the rice was too sticky and too highly spiced, the lentils were too soft [ok that's my fault, I decided to used tinned instead of boiling from scratch] and it looked like a congealed mass of curry risotto with chicken pieces.  I should have known something was wrong when the chicken was cooked in coconut milk.  This was NEVER in any biriyani I've made before.

Poor Anthony, he had to agree, yet again, this wasn't my finest culinary moment.  In fact those are very few and far between these days.  How ironic that I should start a food blog at the precise moment in time my innate cookery skills have gone on vacation............... on a round the world cruise.  Come back! Come back! I beg of you!