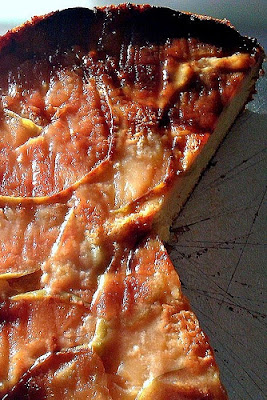 Colleagues have taken to bringing in oodles of cooking apples from their gardens for everyone.  Which is a lovely gesture and somewhat forced me to find a recipe to use them in.  This cake turned out brilliantly.  The bake has a dense yet light texture - thanks to the yoghurt I think?

This recipe is an adaptation of a Waitrose card recipe:

200g butter, softened [I used soft light brown sugar, as it's easier to get light and fluffy with the butter]

Preheat the oven to 180°C, gas mark 4. Lightly grease a round 20cm loose-bottomed cake tin, line the base with baking parchment, then grease the top of the parchment.

Core the apples and slice thinly (no need to peel). Put them in a large bowl, add 25g of the sugar and toss well to coat. Arrange the slices in the tin, overlapping them slightly to form circles.

Beat the butter and remaining sugar together until light and fluffy, using an electric hand whisk or wooden spoon. Add the eggs, a little at a time, until they are fully incorporated and the mixture is smooth. If the mixture begins to curdle, simply add a spoonful or two of the flour and continue to add the egg.

Fold in the remaining flour and yogurt, then carefully spoon the mixture over the apples. Place the cake tin on a baking tray and bake for about 1 hour, or until golden and springy to the touch. Remove from the oven and leave to cool for 20 minutes or so. Turn the cake out onto a wire rack and leave to cool completely.

As you can see from my picture the sides browned a little too much.  My fan oven is the bane of my life in this respect as most things seem to come out a bit too brown around the sides.  So for the last ten minutes watch it like a hawk.  Next time I'll take mine out 5 minutes earlier.

I also made an error of whipping and not folding the honey and cinammon into the creme fraiche.  This resulted in a runny, double cream consistency which tasted nice but couldn't be spooned on the plate next to the cake. There is a definite reason for mixing the honey and cinammon together first and then gently folding into the creme fraiche.  Sometimes I wished I was more obedient ;-)

Next time I think I might add cinnamon to the cake batter mixture - because I love cinammon with apple and just having some in the creme fraiche doesn't infuse the cake with the flavour.