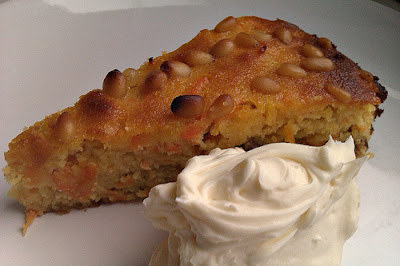 The carrot cake has a long and distinguished history, hailing from the Arab speaking world in the 10th century, on to  the Middle Ages and then finally gaining popularity again during the 2nd World War when rationing meant no sugar to bake with.

According to Nigella this recipe hails from the Jewish Quarter in Venice and thanks to the inclusion of olive oil, pine nuts  and marscapone has a distinctly Italian feel to it.

I first saw Nigella make this recipe on her series Kitchen.  I've made it many times and it's never let me down.  The complexity of flavour never fails to impress.  Plus it's a healthy option because it uses olive oil, only half a cup of sugar and lots of vege.  An all round winner.

Thanks to only using ground almonds in this recipe this carrot cake is incredibly moist and gluten-free.  The rum soaked raisins and the booze-spiked marscapone,  make this cake feel more like a sophisticated, adult dessert than simply a tea time favourite. If you're not too keen on carrot cake then please try this one as it's quite a departure from normal carrot cake.

For the carrot cake
For the mascarpone cream (optional)