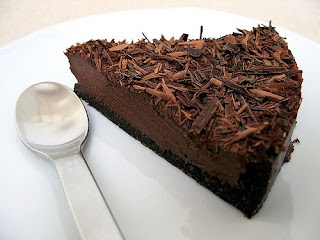 Today I made my "famous" Chocolate Mousse Cake.  It could also be called a torte or tart, or a more sophisticated version of Mississippi Mud Pie.  This is my "go to" recipe when I want to impress.   Even though I readily admit that it's dead easy, it never seems to dampen the compliments flying my way.  It's a grown up dessert because it isn't too sweet thanks to the splash of booze and dark chocolate.

This ultra-simple dessert  requires no baking and can easily be dickied up with a few swirls and twirls to make it look super impressive.  Plus it's even better made the night before which makes it even more stress free.

My adaptations and observations:

In the recipe the mousse filling calls for 4 tbsps of booze but I generally leave it out or just add 1 tbsp, because personally I'm not a fan of strong boozy flavours.  Simply leaving it out makes very little difference to the texture of the mousse.

I use a springform tin but don't press the biscuit base up the sides.   I still use the same quantities for the base, it just makes a slightly thicker crust which I think improves upon the texture contrast per mouthful.

I don't use sugar in the biscuit base,  as I think it's unnecessary.

Some tweaks:
This recipe is adapted from Delicious Magazine - Chocolate Mousse Torte

150g plain chocolate, with at least 60% cocoa solids, broken up

4 tbsp spirit of your choice, such as brandy, dark rum, Cointreau or Amaretto

For the biscuit case:

50g plain chocolate, with at least 60% cocoa solids, broken up

1. Remove the base from a 20cm springform tin. Lightly butter inside the ring and place it upside-down, directly onto a flat serving plate. Secure it in place on each side with a small piece of Blu-Tack. Line the sides with a strip of non-stick baking paper.   (I tend to adopt an easier approach by just lining the bottom with greaseproof paper, as I don't push the biscuit mixture up the sides)

2. Make the biscuit case. Put the chocolate into a heatproof bowl and add the cocoa powder and butter. Rest the bowl over a pan of barely simmering water and leave until melted, then stir until smooth. Put the digestive biscuits and sugar into a food processor and whizz, using the pulse button, to fine crumbs. (I prefer not to make them too fine as having a bit of crunch and texture in the base makes it more interesting on the chew).  Stir into the melted chocolate mixture, then tip into the lined tin and, using the back of a dessertspoon, press the crumbs firmly in an even layer over the base and at least 4cm up the sides to form a casing. (As stated I don't bother putting the mixture up the sides as it's difficult to get it looking nice and even in a high sided springform tin).  Chill while you make the filling.

3. Dissolve the coffee in 4 tablespoons boiling water. Put the coffee and chocolate in a large heatproof bowl, rest it over the pan of hot water until melted and then stir until smooth. Mix the egg yolks and vanilla extract together in a small bowl. Stir into the chocolate and coffee mixture until smooth and then stir in your chosen spirit.

4. Whisk the egg whites in a bowl until just beginning to stiffen, then gradually whisk in the sugar to form a soft meringue. The tips of the peaks should fall over, not stand upright. Gently fold the whites into the chocolate mixture and then pour into the biscuit crumb case. Chill for at least 4 hours or overnight until firm before removing the springform tin.


Thanks to juanelos on Flickr.com - creative commons

This looks fabulous, especially with the chocolate shavings on top! I am not a big chocolate fan, but I would make this (I like mousse and dark chocolate). Congratulations on your win.