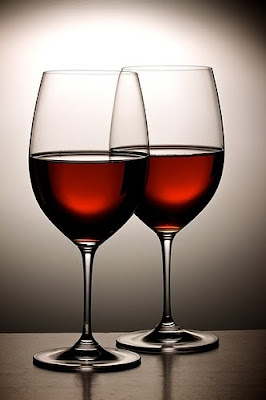 As I've got older intolerance to alcohol has become a sad fact of life for me.  I had a very socially dependent relationship with alcohol from about the age of 15 [we start young in South Africa - and this was the 80's].  In years gone by summers would see me sitting somewhere outdoors knocking back G&T's, mojitos and chilled white wine like there was no tomorrow.  Winter evenings you would find me curled up on the sofa sipping a big glass of mulled red wine.

As of about 8 years ago I noticed that red wine  made my cheeks very rosy and only one glass would give me an instant headache and thirst.  Then about a year ago it got to the point where only two sips would make my face feel like it was on fire.  Sadly, in the last six months even a few sips of white wine summon the same reaction.

Hence, yours truly at the ripe old age of 45 is virtually a teetotaller.

I was very interested to see this article in the New York Times online which says that alcohol may trigger food allergies or just an allergic reaction in itself:

"Beer, wine and liquor contain histamine, produced by yeast and bacteria during the fermentation process. Histamine, of course, is the chemical that sets off allergy symptoms. Wine and beer also contain sulfites, another group of compounds known to provoke asthma and other allergy-like symptoms"

It also goes on to talk about other foodstuffs that contain histamine or encourage the body to release histamine.

My partner has over the last two years developed quite a severe allergic reaction to, what we thought was just gluten, however over time more and more things seem to set him off.  He read the article and says that most of it rings true and he'd reached the same conclusions himself with regards to many of the listed foodstuffs.  Worst of all, it seems he actually craves those things which are worst for him!  I thought the body was meant to inituitively know what was good for it and reject what wasn't?

Oh woe is us!  Eating and drinking is now potentially becoming a minefield, whereas before we didn't give it a second thought.  My theory is modern life, stress, pollution etc. etc. mixed with an aging body leads to a suppressed/over-senstive immune system which start to over-react to any perceived threat.

I remember taking my son to an doctor who specialised in allergies (can't remember his title!) and he confirmed that you can crave the foods you need to avoid - this was the case with dairy for my son.

Too bad about the alchol though, I drink very little, but I hate when I can't have even one drink!