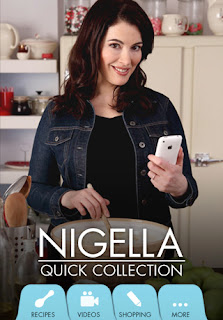 Interesting news today that Nigella Lawson's "Quick Collection" is No. 1 in the I-Tunes paid apps.  She says  "I am iPhone-obsessed and app-addicted anyway, so feel particularly excited about my own 'Nigellapp'.
Jamie Oliver launched his app in November last year [I missed this bit of news] and his "20 Minute Meals" also went to No. 1.

I don't own an i-Phone and have never downloaded an app. Mainly because I can't afford an i-Phone not because I don't want one. Not possessing one probably means I'm not qualified to say this but I think I'd still prefer to use a recipe from a book or on a sheet of A4 that I've printed off the internet.

Being long sighted I have to wear glasses to read and I'd sure as hell need to don my glasses to read a recipe on a small screen.  Plus the phone would end up batter splattered and greasy non? 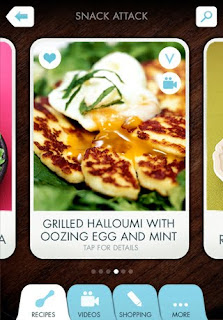 My all time favourite critic Jay Rayner calls the new trend for chef apps a "marketing tool". He goes on to say  in this article in the Guardian :

"You just know there was a business meeting in which terms like 'branding' and 'multi-platform' have been bandied about and the result is a cooking app.

The proof of the pudding would be in the eating, he said. "It is not the medium but the content that is important. Whizzy gadgets are fine, but if the recipes themselves aren't very good then people will not go back to them." He added that the best cookbooks are often those whose pages are stuck together with sauce, and questioned how the iPhone would deal with the hands-on, often messy, nature of cooking.
What I would love to see if someone going into the Apple store on Regent Street to explain that the reason their iPhone is broken is because they smeared pesto all over it," he said. "I think people will find when their iPhone is covered in crap, that cooking with an iPhone is not such a good idea."

What do you think of the recipe app?  Good idea, or yet another sleb chef gravy train ride?

I'm not sure about this either. I have an internet phone for my work but I believe it is expensive to download these apps and certainly not approved on a work phone! You are right about the reading though, I've tried searching the net on my phone and the print is teeny tiny!

Oh dear, shows how up-to-date I am, I'm not sure I quite understand what an app is???

:-) i only have a very basic idea as don't own one. The way I understand it you go onto i-tunes, download the "application" and then synch it with your i-phone and wa-lah! you have said recipe collection on your phone. I did check it out on i-Tunes but didn't actually look to see how much it cost. Will check now...............

Thanks Melanie - think I might just stick with the books and lovely blogs of course,